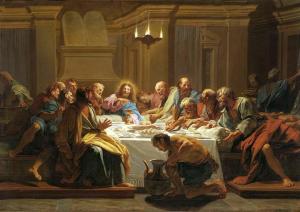 I have a confession to make – I’ve developed a deeper appreciation and interest in the Old Testament, and it’s deepening my reading and understanding of the New, especially of the Gospels and of Paul’s letters. It has also radically re-aligned my understanding of one of the most important practices within Christianity since it’s foundation – the Communion or Eucharist. This is partly because I’ve been reading a lot of OT scholars of late, but also because of Richard Hays’ enlightening work in “Echoes of Scripture in the Gospels” about making use of metalepsis when reading OT quotations one finds in the NT. By metalepsis, Hays simply means that when one sees a verse of the OT quoted in the NT, do not just look for the corresponding verse in the OT and be satisfied, but rather read the whole OT chapter or chapters from which that one verse was obtained and quoted in the NT. Following that advise has wrecked my theology of Communion – but only for the better. So let me share with you how metalepsis has challenged my understanding of Communion.

The Gospels record a time when Jesus was asked what was the greatest commandment in the Torah. Jesus responded by saying

Years ago I simply thought of this as an injunction to strengthen my personal relationship with God via much bible study, prayer, church activities and a zeal to be obedient to God’s laws as found in the Bible. Of course, having been brought up a Pentecostal, such an individualist interpretation of this passage is well within acceptable bounds and will be common to many readers of this post. But going back to read and reflect on Deuteronomy 6 where Jesus quotes this from yields a much more interesting interpretation than most will be used to.

The Shema, Ancient Israel and the Ancient Near East

If one reads the above passage from any good bible, one might see a footnote that points to Deut 6:5 as the source of Jesus’s quotation in Mt 22:37-38. What many readers of the bible may not know however is that Deuteronomy 6:4-9 is the foundation of a famous prayer called the Shema which was recited by Jews in Jesus’s day and is still recited by modern day practicing Jews as well. You can find out a bit more about it here. The fact that Jesus was quoting from the Shema is more obvious if you read Mark’s account of the interaction (Mk 12:29-34), which starts off with “Hear, O Israel…”, exactly as the opening line of the Shema.

Reading the whole of Deuteronomy 6 however, I found that the primary concern of Yahweh giving that commandment to love him so wholly was tied to something I’m discovering more and more all over both the OT and subsequently, seeing it’s footprints in the NT – Yahweh had a covenant relationship with Israel, who in their Ancient Near Eastern (ANE) culture were surrounded by many neighbouring nations who worshiped many other gods. Therefore this injunction to love Yahweh with their heart, soul and mind was a covenant reminder – a reminder not to go chasing after those other gods. Check out some subsequent verses in Deut 6.

Note that the consequence of following those other gods were not just personal. This injunction was about the fate of the nation Israel, not about an individual’s own punishment.

I also began to notice that many of the commandments in the Torah are prefixed or suffixed by a reminder that Yahweh was the one who delivered them from Egypt (or the one who created the world) and hence the only one they were to worship (Ex 20:1-3; Deut 5:6-7; Lev 26:13-14).

Many of us modern readers may miss the seriousness of this injunction because we tend to have separations between our religious convictions and our day to day interactions with people around us, but in the ANE world, everybody’s religious beliefs were part and parcel of their lives and all activities, including how they related to other neighbours. Having one’s “personal” or “family” gods in addition to national gods was the norm, not the exception amongst ancient Israel’s neighboring nations with whom they interacted regularly.

Hence what Jesus calls “the greatest commandment” was a commandment to Israel mainly to remind them to avoid unfaithfulness to Yahweh and switching their loyalty away from him to other gods. It was a covenant reminder. In a culture that was surrounded by many gods, an intentional effort was needed to remind them of the one Creator god with whom they had a special relationship as a nation. Hence the encouragement not just to love with all their minds, heart and soul, but additionally to “impress them on your children”, “tie them as symbols on your hands” etc etc. As with all outward showings of belief aka rituals, doing these things were not a guarantee of one’s love for Yahweh, but a means to remind oneself of who one was vis-a-vis one’s God. Unfortunately as with all outward expressions of inner belief, sometimes the rituals themselves gain a life of their own, leaving what it was supposed to remind us of itself behind. This is exactly the case by the time Jesus arrived on the scene, but in addition this has been the bane of all religions, Jewish, Christian, Islam, you name it. Too many of us find our comfort in our symbols rather than what they are supposed to represent.

The Wine as a Covenant Reminder

Having been directed to the importance of covenant in understanding the death of Jesus Christ by Michael Gorman of which I wrote about here, my mind immediately saw the link between “The Greatest Commandment”, and the wine of communion. When Jesus picked up the wine to share with his disciples, he called it “the blood of the covenant” (Mt 26:28 NIV) and “new covenant in my blood”. In this process, Jesus was not only evoking the “blood of the covenant” in Ex 24:8, he also invoked Jeremiah’s prophecy of a “new covenant” (Jer 31:31). Mulling this over, I came to the following conclusion.

Drinking of the communion wine is primarily an act reminding us that we the gathered people together are in a covenant relationship with God. It is a reminder to uphold the 1st great commandment – to not follow any other god but Yahweh, who has revealed himself in the person of Jesus Christ.

The Bread as Community and Unity Reminder

Which brought me then to the subject of the bread. I’m yet to find any Old Testament linkage of Jesus’s use of the bread to signify his body. However, looking at Paul’s epistles and his statements about “the body of Christ”, it seems to be that the bread then stands for the unity of the participants gathered as one people of God. Paying better attention to the full context of Paul’s injunctions in 1 Corinthians 11:17-34 then, one sees Paul’s rebuke of disunity in the body of Christ at Corinth as manifesting itself in how they actually didn’t have “the Lord’s supper” , but rather were eating individual meals (v 20-21). And given that the whole NT is emphatic that love of God must lead to love of brother, I came to the second conclusion.

Eating the communion bread is primarily an act reminding us that we who are gathered are one in the body of Christ, accepted by grace and of equal worth before God. Just as the unleavened bread used in the Passover during Jesus’s last supper with the disciples, we are indeed holy and set apart for his purposes – that of being a royal priesthood and a holy nation for the benefit of the world. We are made up of Jews, Gentiles, slave, free, male, female, Ewe, Akan, Dagomba, Fante, American, Chinese, Yoruba, Igbo etc. Nothing must divide us, because nothing can separate us from the love of God which we already confess by taking the wine. It is a reminder of the second greatest commandment – love your neighbour as yourself.

Following from these 2 conclusions on Communion, it became more obvious to me the futility of building Christian unity without prioritizing what Jesus explicitly commanded we must do regularly – communion and its associated Christian fellowship. As I put on my Facebook wall recently, Jesus never said “when you meet, have bible discussions in remembrance of me”, but rather speaking of communion, he says “do this, as often as you drink it, in remembrance of Me”. As Scott McKnight pointed out recently whiles reviewing Christian Smith’s “The Bible Made Impossible” (a book I enjoyed myself and highly recommend), it is impossible to build unity around unity of biblical interpretations, and the abundance of divisions between many churches all claiming to obtain their authority from “Scripture only” is clear evidence to that fact. Unity built on “doctrine” and biblical interpretations is only possible among those who hold the same thoughts on these kinds of matters, which renders the concept of Christian unity quite unattainable.

So, I’ve come to some conclusions after such re-arrangement of my mental furniture regarding communion, Christian unity and the Great commandments. Whiles I continue to vigorously pursue improving my understanding of Jesus via the study of scripture, of theology and cultural/historical backgrounds of the biblical text, I’ve resolved that the pursuit of fellowship takes precedence over the pursuit of theological “rightness”. I’ve found myself having communion in some “unapproved” locations with some “unapproved” friends, and we’ve enjoyed doing so tremendously. This has not dulled my interest in learning one bit, but has rather led me to understand Jesus better – he was more interested in gaining a “negative” reputation for spending time eating and drinking with the “unacceptables” than he was pleasing the theological gatekeepers of his time. He didn’t have to compromise any of the truth he knew, but he knew that truth has a purpose – that in him (Jesus Christ) “God was reconciling the world to himself, not counting their trespasses against them” (2 Cor 5:19)

Isn’t it genius of Jesus to use the one practice he commanded us to do regularly to also serve as a means to remind us of the 2 Greatest Commandments?

3 thoughts on “Communion & The Greatest Commandment”