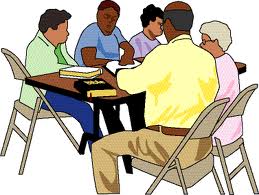 One of the issues that one is confronted with when speaking of small church communities like house churches is the tendency for people to immediately relate it to their experience of “Bible Study” groups. This can indeed be a frustrating experience for the one doing the communication, since naturally human beings easier understand a concept by relating it to something that they may already be familiar with. I got the sense of this problem again during our most recent public seminar event “A Different Kind of Christianity”, and I think an attempt to explain what the goal of discipleship via small communities is.

Many Christians have simply assumed that the purpose of a meeting of Christians is to primarily listen to “the word of God”, which is typically a sermon based on some biblical passages. As a result, even when Christians meet in small group settings, it must be defined by the necessity to “look into the word” – aka read the bible. Hence whenever one speaks of home meetings – the mental picture is people gathering to follow a Bible Study manual.

There are many reasons why this has become the standard expectation

As a result then, even when we try to create smaller gatherings, the goal has been typically to see this as an opportunity to make Christians more bible-savvy. Any attempt at discipleship then gets filtered through this lens as well. Any other thing else is seen as a secondary benefit.

What’s Wrong With These Assumptions

There are many things problematic about these assumptions and here I mention a few without going into too much detail.

What Should It Be About Then?

If the purpose of small group gatherings is not to create “bible scholars” out of us all, then what exactly is it for, and what should be happening in such gatherings?

Let me first state here (before I’m accused of anything untoward) that I do believe in the importance of the bible and its authoritativeness for Christian life. I read the bible regularly and have a growing library of books from theologians and scholars whom I read often (besides a very long wish-list on Amazon). But I believe that small group gatherings have the enormous potential to form us into disciples of Jesus in ways that large gatherings cannot, and running them with the same mentality as large ones is an exercise in missing the point.

For those who have such gatherings alongside large church meetings, it might be time evaluate why exactly we have these kinds of gatherings. Most places which have had such gatherings have ended up abandoning them, or stifling them of all life, making them repetitions of what larger church gatherings do. If we intend them to be places of fulfilling God’s mission of discipleship and community, then we must totally re-orient our mind and attitude towards such groups, and empower them to function properly. If not, then don’t make a pretense at having such small group gatherings, because they become more of a source of confusion and dissatisfaction than they should be.

One thought on “Why Small Group Gatherings ≠ Bible Studies”